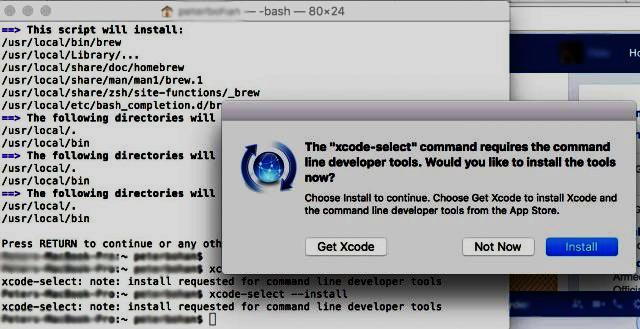 I was helping someone set up FFmpeg and they have never opened terminal before so I was sure they needed Homebrew installed. I grabbed them the link available at brew.sh and they were prompted to download Xcode from the App Store and that’s just too much space to waste on an IDE we aren’t going to use (sorry, Apple). I found a great two step process over at ryanwinchester.ca

open iTerm (because we use iTerm, always… if you are not using iTerm, please go there, download, install and run then come back) but my friend was using terminal so that’s why the pictures show terminal.

and when prompted and select “Install” when the system asks you as seen below:

after that you can type (or paste):

and that will eventually ask you for permission to install Homebrew and then your password.

after that, you have Homebrew and you saved yourself a lot of hard drive space.

Thanks to Ryan Winchester for posting the tip originally!